The First Mermaid Atargatis – How did she come about?

The First Mermaid is also called Lady Goddess of the Sea 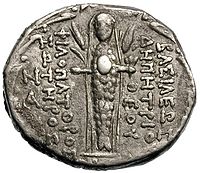 In Ancient Roman times, Atargatis was a beautiful and powerful priestess who fell in love with a human shepherd boy. He, simply being mortal, did not survive her divine lovemaking and died. She became pregnant with his baby and soon became distraught and remorseful. After the birth of a baby girl Semiranis on the shore, she threw herself into the ocean to drown. Her beauty was so great that the Gods did not let her die, but changed her into a Mermaid. Not only did she become a mermaid, but a goddess of the seas. Half woman and half fish. Atargatis was depicted as having long, flowing hair like the water.

She is the first mermaid.

The reverse of a coin of Demetrius III depicts fish-bodied Atargatis, veiled, holding the egg, flanked by barley stalks

Great Mother and Goddess of Fertility of the earth and Water 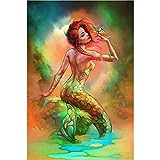 ×
Product prices and availability are accurate as of the date/time indicated and are subject to change. Any price and availability information displayed on https://www.amazon.com/ at the time of purchase will apply to the purchase of this product.
History:
During the Roman Era, she was worshiped at the shrine in Hieropolis and had multiple temples dedicated to her. At her temples were ponds containing her sacred fish that only her priests were allowed to touch. Supposedly the fish knew their own names and would come when called. They even wore jewels and would snuggle up to people like a pet. In her day, worshipers would immerse themselves in her sacred waters to offer praise. 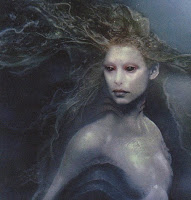 One way modern worshipers choose to honor and connect with the first mermaid Atargatis is to call out to her directly. Try sitting by a body of water and opening up to receive any messages that come through. You can hold a specific question in mind, or let the goddess’ wisdom flow into the quiet. Afterward, write or draw what you experienced. Don’t forget to leave a gift in her honor; consider leaving a treat for her sacred fish to enjoy.
Despite the legend of Atargatis being thousands of years old, people still worship and honor the mermaid even into modern times!
First Mermaid